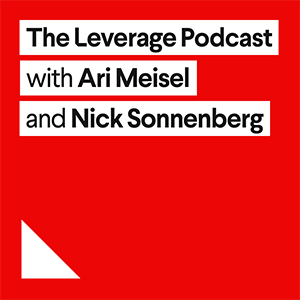 He’s the owner of the 5th highest I.Q. ever measured and the founder of Scorpion Computer Services. He’s also the inspiration behind the CBS TV show, “Scorpion.” Walter O’Brien is Ari and Nick’s guest on Leverage this episode, and he’s got a load of interesting stories to share. From cyber warfare to breaking up an engagement at the request of a wealthy, concerned father, Walter’s team will take on any job and figure out how to get it done. This is one of the most fascinating podcast episodes you’ll ever hear. In Walter’s words, it is important that you pay attention because this episode could change your life.

A movie-worthy, real-life spy mission pulled off by Scorpion.

When Ari asked Walter about one of the most interesting projects he’s ever worked on, he shared the story of a wealthy American father who was concerned that his son’s engagement to a young woman from Eastern Europe was motivated entirely by ulterior motives. Walter shares the entire story of how his team set up a sting operation of sorts that tricked the girl into confessing her true motives, broke up the relationship, got Homeland Security involved on the American side, and accomplished the mission that reunited the father and his estranged son. It’s truly a movie-worthy story that you can hear on this episode.

The most difficult tasks Scorpion faces is the marketing of its own services.

For a company that solves the major problems of governments and billion-dollar corporations, you would think Scorpion wouldn’t have many problems of its own to solve. But that would be wrong. When Walter talks about the biggest problems his company faces, he immediately mentions the challenge that marketing and sales are for his own company. If you listen, you will discover how one of the smartest men in the world is still at a loss when it comes to predicting human nature and motivating purchases. Be sure you listen.

How you can hire a Supernanny and a Genius to solve your biggest problem.

If you have $10,000 available and a serious problem to solve you can hire the team at Scorpion Computer Services to take on your project. They will assign your problem a Supernanny and at least one Genius who will lead a team to investigate all the issues surrounding your problem and provide a solution for it. The team at Scorpion has an amazing workflow and systematized approach that enables them to solve even the most difficult problems. Don’t miss this conversation, it’s one of the best you will hear.

Why you should assume 99% of the people around you are wrong.

When Ari asked Walter O’Brien For his top three pieces of advice to enable others to be more effective, Walter pointed out that if you make more than $34,000 per year, you’re in the top one percent of people in the world, in terms of wealth. His point was that 99% of the people in the world have not been as successful as you. That means you need to be very careful about who you listen to and the advice you take. Most of the people around you don’t know as much as you. You can hear more insightful observations like this from Walter, on this episode of Leverage.

Outline of This Episode