C-Suite Quarterly, published as CSQ magazine, is a regional media outlet that addresses C-level executive problems and solutions. The magazine featured O'Brien in its Summer 2017 issue, describing him as "One of the world's smartest people... who has spent his life solving problems and saving lives, now inspires others to find a passion for coding and hacking." 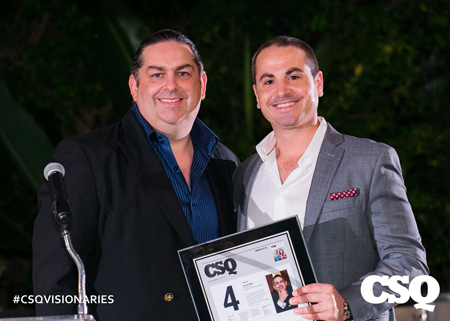 Since founding Scorpion Computer Services in 1988, O'Brien has consulted for some of the world's largest financial institutions, software companies and militaries on software infrastructure and architecture, efficiency, and security consulting. A sought after resource on the topic of cybersecurity, O'Brien spoke to solutions on ransomware and contemporary security concerns on CNBC in 2017 and keynoted MIT's Technology Review.

CSQ's Visionary awards also recognized O'Brien for his contributions to education and inspiration for children to pursue science, technology, engineering and mathematics subjects in school. As the executive producer of CBS's television show, Scorpion, now in its fourth season, O'Brien reaches tens of millions of viewers in over 180 countries. Regarding his team's work, O'Brien says, "Being smart is cool. We're seeing a shift and a diversification in what people perceive to be popular. I'm glad to contribute to a renewed celebration of intelligence."

Scorpion has won the most innovative product and most innovative company award, being named the Patrick Soon-Shiong Innovation award winner by Los Angeles Business Journal. In 2017, O'Brien won Unite4:Humanity's Humanitarian of the Year award. For over two decades, Scorpion Computer Services has contributed to the greater good by managing geniuses as they transform Scorpion client ideas into reality.

From confronting and solving issues of national security to rescuing failing businesses, Scorpion Computer Services is the brainpower behind solving global issues, proving "smart is cool." The company's clients include government, military, a number of Fortune 5000 firms as well as start-ups and small- and medium-sized businesses with opportunities across cutting-edge information technology solutions, transportation and logistics, business efficiency and marketing.


Walter O'Brien is the founder and CEO of Scorpion Computer Services, Inc., and CEO of Scorpion Studios. He is the Executive Producer and the inspiration behind the hit CBS television drama, Scorpion, with over 26 million viewers in the U.S. and airing in 188 countries. The U.S. Department of Homeland Security has certified Walter O'Brien as being a person of national interest to the United States and granted him an Extraordinary Ability EB 1-1 Visa. He has worked with the U.S. Department of Homeland Security, plus Navy and Air Force systems to deploy artificial intelligence that protects American military personnel. Walter was recently recognized by the Fort Wayne Base Community Council for saving countless lives and awarded a member's Combat Infantry Badge and Battle Dress Uniform from Operation Desert Storm. The Northeast Indiana Defense Industry Association recognized his tremendous support of defense initiatives. He was the youngest recipient of Unite4:Good's Humanitarian Lifetime Achievement Award. In addition, he has worked with multiple Fortune 500 companies including the world's largest mutual fund, Fujitsu, Trados, Oracle Corporation, Baltimore Technologies and Critical Path. O'Brien serves as chairman or former board member for Strike Force Solutions, Talentorum Alliance, Lawloop and previously served on the boards of Houston Technology Center, American Environmental Energy, Starglobe and Toin Corp.

O'Brien regularly donates his time to charities and the community in general, to encourage all generations to celebrate intelligence. O'Brien provided the seed funding for TaxiWatch Kilkenny, a suicide prevention program that has saved 100 lives since its inception in 2015. Appearing on CNBC, Fox News and CBS as an expert on computer security, in 2015 O'Brien contributed to the next XPRIZE selection as part of XPRIZE Visioneering.