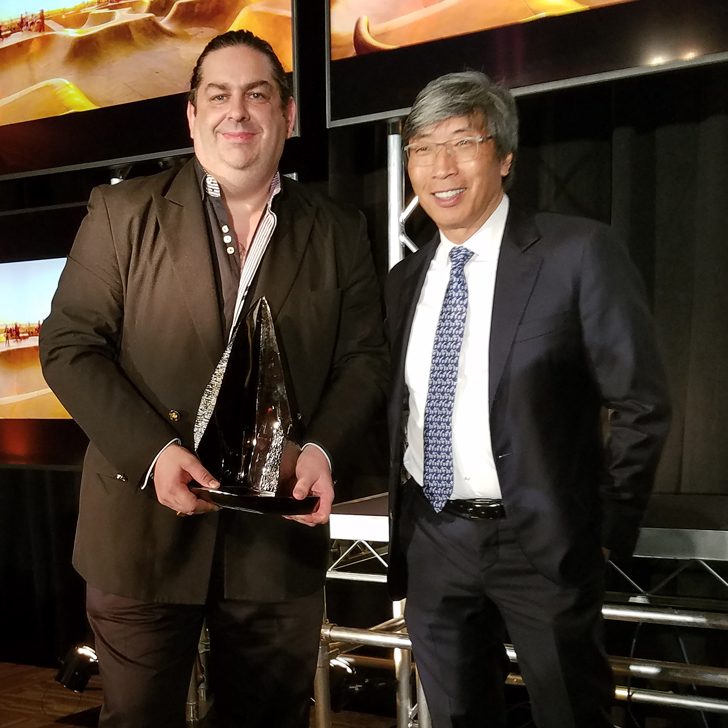 LOS ANGELES, Nov. 22, 2016 /PRNewswire/ Scorpion Computer Services, Inc., the "Think Tank for Hire" led by founder and CEO Walter O'Brien won the 2016 Los Angeles Business Journal's Patrick Soon-Shiong Innovation Award for being one of the most innovative companies in Los Angeles County. For the fourth time in 18 months O'Brien and his firm has received a commendation for their work and contributions such as ScenGen, the artificial intelligence engine. Scorpion Computer Services was also applauded for introducing millions of people to the concept that "being smart is cool" with /Scorpion, CBS's number one drama inspired O'Brien's company. In the television show, Walter O'Brien is featured as the main character. He is supported by"Team Scorpion" which resembles the real Scorpion Computer Services that solves problems using technology and raw brainpower for government, military and ordinary people.

During his acceptance speech for the award, Walter thanked Dr. Patrick Soon-Shiong, after which the Innovation Award was honored for his contributions to the healthcare field through Abraxis BioScience and NantWorks and the event was sponsored by Merrill Lynch. Among the most popular figures to bridge Hollywood and the once-obscure fields of computer science and artificial intelligence, O'Brien joked that "It's great to be recognized as a thirty-year overnight success." Only a handful of people have had a major network television show based off their life in their own lifetime.

Scorpion Computer Services, provides intelligence-on-demand to the U.S. government, military and a number of Fortune 5000 firms. O'Brien's firm also provides strategic counsel to some of the most influential people in the world across politics, finance and technology. Best known for the firm's "high IQ" recruitment and retention, the company works with some of the highest "emotional quotient" individuals to manage complex and sensitive projects for its clients.

In the early 1990s, O'Brien led the Irish team in the Information Olympics and led in the Wisconsin International Problem Solving competition.

Walter O'Brien is the founder and CEO of Scorpion Computer Services, Inc., and CEO of Scorpion Studios. He is the Executive Producer and the inspiration behind the hit CBS television drama, Scorpion, with over 26 million viewers in 180 countries. The U.S. Department of Homeland Security has certified Walter O'Brien as being a person of national interest to the United States and granted him an Extraordinary Ability EB 1-1 Visa. He has worked with the U.S. Department of Homeland Security, plus Navy and Air Force systems to deploy artificial intelligence that protects American military personnel. In addition he has worked with multiple Fortune 500 companies including the world's largest mutual fund, Fujitsu, Trados, Oracle Corporation, Baltimore Technologies and Critical Path. O'Brien serves as chairman or board member for Strike Force Solutions, Talentorum Alliance Houston Technology Center and Lawloop.

No media source keeps their finger on the pulse of the region's business better than the Los Angeles Business Journal. Each week, more than 98,500 CEOs, executives, senior managers, and other influential decision-makers rely on the award-winning Business Journal for the business news they need most. This loyal readership is a powerful group of potential clients and customers for your business. 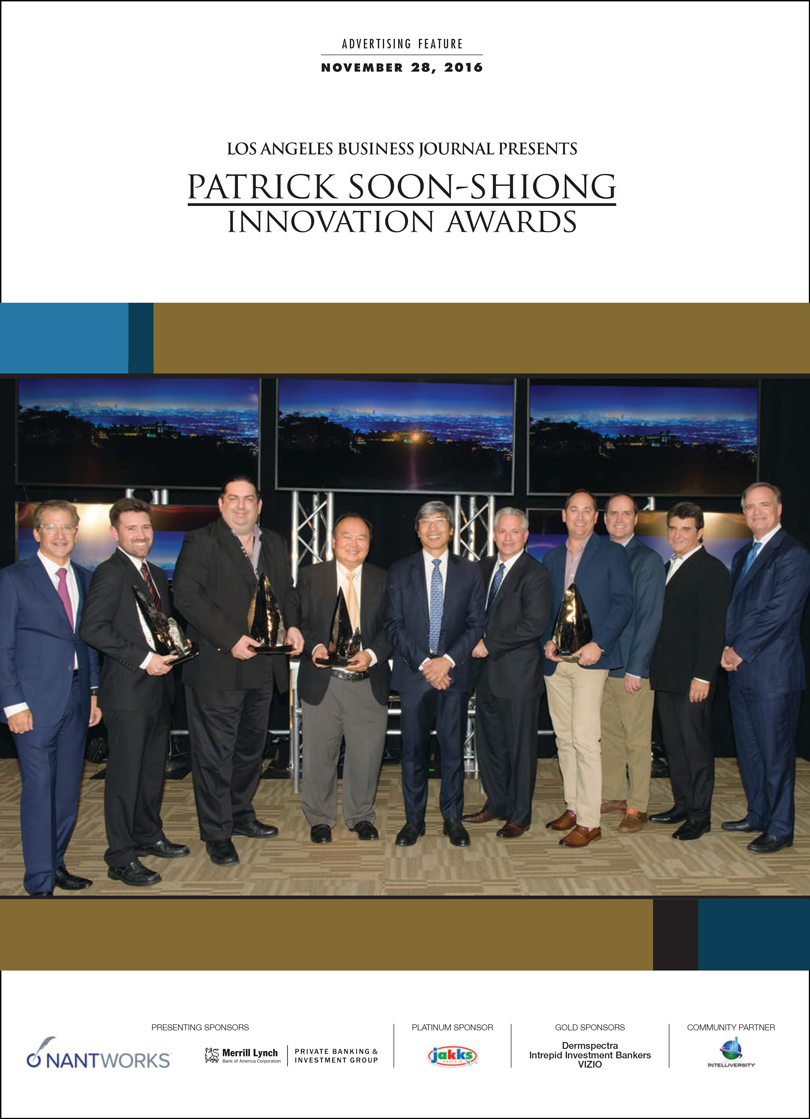 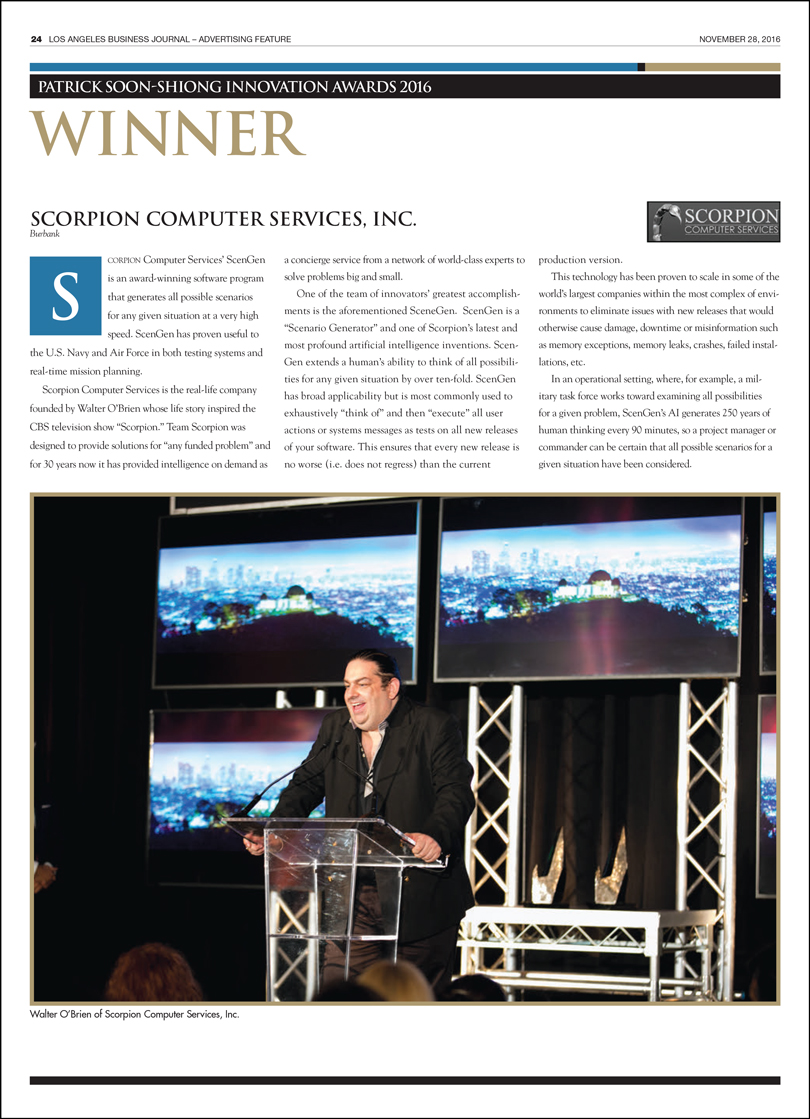