O'Brien says "being smart is cool" at the conference known for hosting the 'coolest, most industrious, most laid back hustlers of the business world.'

O'Brien chronicled his lifelong journey confronting bullies and staying positive with anecdotes about his early life that would later inspire CBS's number one television drama, Scorpion. O'Brien is an executive producer at CBS. 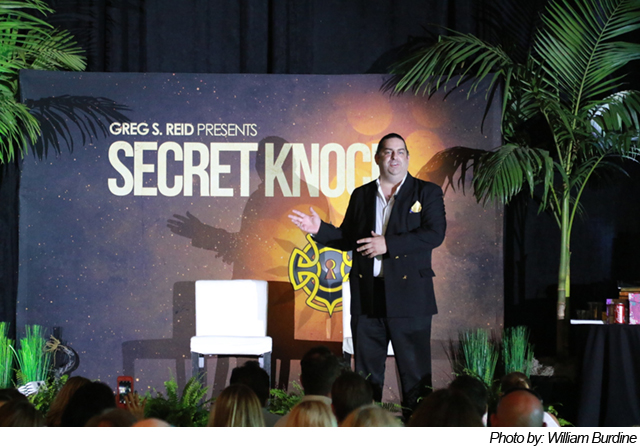 A problem-solving expert and the CEO and founder of one of the world's most advanced consulting firms Walter O'Brien has worked with governments, international heads of state, the United States Navy, Air Force and Fortune 500 firms to design, implement and maintain computer security and information-technology systems. His firm helps ordinary people do extraordinary things through Concierge Up, a "think tank for hire" offered through Scorpion Computer Services.

Regarding Walter O'Brien's contributions as keynote speaker, Greg S. Reid, host of Secret Knock said that "Walter is as fascinating as he is intelligent and entertaining. His energy and positive attitude reminded all of us at Secret Knock how great people can be while remaining humble."

Walter O'Brien said of Secret Knock that "the event is a hidden gem among entrepreneurship and speaking events. It brings together some stellar but also down-to-earth people."


Walter O'Brien is the founder and CEO of Scorpion Computer Services, Inc., and CEO of Scorpion Studios. He is the Executive Producer and the inspiration behind the hit CBS television drama, Scorpion, with over 26 million viewers. The U.S. Department of Homeland Security has certified Walter O'Brien as being a person of national interest to the United States and granted him an Extraordinary Ability EB 1-1 Visa. He has worked with the U.S. Department of Homeland Security, plus Navy and Air Force systems to deploy artificial intelligence that protects American military personnel. In addition he has worked with multiple Fortune 500 companies including the world's largest mutual fund, Fujitsu, Trados, Oracle Corporation, Baltimore Technologies and Critical Path. O'Brien serves as chairman or board member for Strike Force Solutions, Talentorum Alliance Houston Technology Center and Lawloop.