LOS ANGELES, June 27, 2016 /PRNewswire/ -- Walter O'Brien, the founder and CEO of Scorpion Computer Services, Inc. and the inspiration behind the hit CBS drama, Scorpion was celebrity guest judge at the University of Southern California's Innovation Conference 2016

O'Brien keynoted the conference in a speech that offered young entrepreneurs advice, including to only take advice from people who are qualified to give it. O'Brien was also on a panel that decided the allocation of $50,000 in awards to entrepreneurs in the pitch competition. 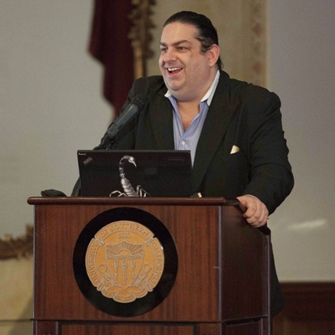 Regarding Walter O'Brien's contributions as keynote speaker and guest judge, Associate Director of the Marshall Center for Global Innovation Steven Mednick said: "Walter was the star of the day. His presentation was riveting and his life has been and continues to be amazing. He is one who has made a difference for our country."

Walter O'Brien said of the conference that "USC's brightest minds gathered to pitch some of the most exciting, novel and practical technologies. It's a pleasure to contribute to the entrepreneurial community at USC."

Walter O'Brien is the founder and CEO of Scorpion Computer Services, Inc., and CEO of Scorpion Studios. He is the Executive Producer and the inspiration behind the hit CBS television drama, Scorpion, with over 26 million viewers. The U.S. Department of Homeland Security has certified Walter O'Brien as being a person of national interest to the United States and granted him an Extraordinary Ability EB 1-1 Visa. He has worked with the U.S. Department of Homeland Security, plus Navy and Air Force systems to deploy artificial intelligence that protects American military personnel. In addition he has worked with multiple Fortune 500 companies including the world's largest mutual fund, Fujitsu, Trados, Oracle Corporation, Baltimore Technologies and Critical Path. O'Brien serves as chairman or board member for Strike Force Solutions, Talentorum Alliance Houston Technology Center and Lawloop.

O'Brien regularly donates his time to charities and the community in general to encourage all generations to celebrate intelligence. He is a frequent media commentator, public speaker and radio show guest. O'Brien provided the seed funding for TaxiWatch Kilkenny, a suicide prevention program that has saved 75 lives since its inception in 2015. Also in 2015 O'Brien contributed to the next XPRIZE selection as part of XPRIZE Visioneering.

Scorpion Computer Services also offers its services to the general public through ConciergeUp.com, a global think-tank-for-hire that provides on-demand intelligence as a concierge service for any funded need.